The University of Colorado Boulder was founded in 1879 and, during its 125+ years, the school has played an integral role in shaping Boulder’s physical and cultural landscape. Nearly a century after CU Boulder was founded, Golden West Senior Living came to be, on a parcel near the CU campus. The founders’ main mission for Golden West was to provide affordable housing for Boulder seniors – an issue that as far back as 1969 was on the radar of citizens in Boulder.

Though CU Boulder and Golden West offer different services and cater to wildly different age groups, the two have more in common than just being neighbors. Both are long-time institutions of the Boulder community and both offer a welcoming place for people to live and enrich themselves. They also contribute to the unique culture of Boulder.

Golden West —originally built on a small hill “far from town,” as a founding board member reminded us and early photos prove —is now located directly across from the CU Events Center and squarely settled among a cluster of student apartments in a busy, energetic hub. It’s worth mentioning, too, that for three months every summer, CU Boulder empties and everything quiets. The students head back home, taking nearly one-third of our city’s population with them. The students add a rich texture to the city, but summers are a special time when traffic wanes and bike paths feel bigger.

Much like CU Boulder, Golden West is home to people from all over the country, but there are natives, or nearly natives, living there, too. One of Golden West’s five centenarian residents, Ollie, grew up next to CU’s stadium during the dustbowl and depression years — years CU students have only read about in history books.  As one of 12 children, Ollie did not have the financial means to attend CU. Instead, he enlisted in the U.S. Army and served our country during WWII. Following his military career, Ollie opened a mechanic shop on Walnut and 14th Streets before selling his business and taking over as building superintendent for the Daily Camera offices. Ollie, like Golden West and CU Boulder, has helped shaped Boulder’s rich history, and he is proud to call this city his home. 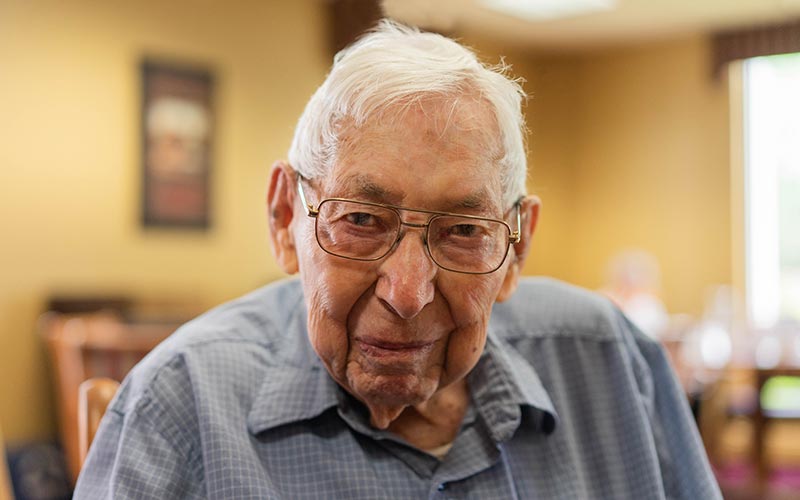